Great Book of Hemp, The - by Rowan Robinson 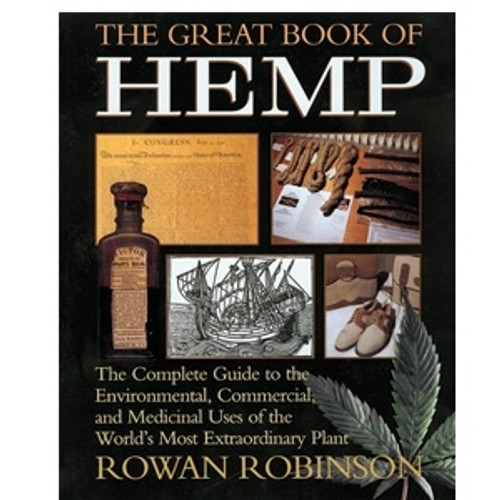 Great Book of Hemp, The - by Rowan Robinson

Buy Wholesale Great Book of Hemp, The - by Rowan Robinson for your Smoke Shop & online store.

The Great Book of Hemp: The Complete Guide to the Environmental, Commercial and Medicinal Uses of the World's Most Extraordinary Plant by Rowan Robinson

Hemp, Cannabis sativa, has been called the world's most versatile plant. Materials made from hemp fiber have been discovered in tombs dating back to 7000 B.C. During the Middle Ages hemp was used to treat fevers, insomnia, and malaria. Columbus's ships had sails of hemp, and during colonial times it was universally grown because its strong fibers made superior ropes, sails, cloth, and paper. In fact, hemp was used for money in most of the Americas from 1631 until the early 1800s, and the original drafts of the Declaration of Independence and the Constitution were written on hemp paper.

POWER OF THE DOG - Miscellaneous

Power of the Dog, The - Don Winslow [Paperback]

From the bestselling author of Savages (now an Oliver Stone film). An explosive novel of the drug trade, The Power of the Dog, takes you deep inside a world riddled with corruption, betrayal, and...

DRUGS OF THE DREAMING - Miscellaneous

Drugs of the Dreaming - Oneirogens

Drugs of the Dreaming - Oneirogens: Salvia Divinorum and other Dream-Enhancing Plants by Gianluca Toro, Benjamin Thomas and Jonathan Ott The first comprehensive guide to oneirogens naturally...

THE WIZARD OF OZ - Miscellaneous

The Wizard of Oz by L. Frank Baum They're off to read the Wizard--the original, imaginative American tale written by Frank L. Baum just over a century ago. All the beloved characters are here, along...

The Big Book of Buds series is among the most respected guides to marijuana strains.The Author has taken all the very best strains from previous books, and puts them all into one big list in this...

Little Book of Earth, The

The Earth is now desperately vulnerable and so are we. This gift-priced-and-sized book contains original, stimulating mini-essays about what is going wrong with our planet and about the greatest...

The Art of Weed Butter: A Step-by-Step Guide to Becoming a Cannabutter Master

The Art of Weed Butter Make your butter just right and you'll get the highest quality results.Weed butter, or cannabutter, is the optimal way to transfer the THC from cannabis into an edible. Plus,...

Weed: Everything You Want to Know but are too Stoned to Ask by Michelle Lhooq

Packed with useful tips and delicious recipes from a slew of experts, Weed covers smoking, cooking, and growing cannabis, as well as proper stoner etiquette and a guide to must-visit destinations...

An Illustrated Guide to Subconscious The only guided journal of its kind, Dreamer's Journal is a vibrant, visual exploration of dream symbols that provides anyone with the resources to record and...

Mini Digital Scale The TUFF-WEIGH™ digital mini scale features a rubberized, impact-resistant exterior for maximum durability with a shape that easily fits in your pocket or bag. Ideal for arts and...

Digital Mini Scale The TUFF-WEIGH™ digital mini scale features a rubberized, impact-resistant exterior for maximum durability with a shape that easily fits in your pocket or bag. Ideal for arts and...

The CFC 2.0 has an improved and amplified design with a revolutionized airflow. The device is ultra discreet, compact, and lightweight making this an ideal device for on the go use. The versatile CFC...

Eating or ingesting marijuana gives a longer, more-powerful high, spares your lungs, and allows you to partake in private. This makes it perfect for patients who need steady relief from pain, as well...

The SOURCE orb XL 2 is the perfect vape pen with you anywhere. The large capacity atomizers make it perfect to take with you camping, load in the morning, and take hiking with you with less loading...

This hemp bookbag is a must have in class and out &ndash; made to house books but perfect for everything. With its classic front zippered pocket on the outside and secret storage pocket inside,...